Coach Sergio Gonzalez is proud to announce that The Austin Lady Mustang Soccer team won the Waller Classic Tournament held earlier this month. Austin’s Lady Mustangs began the tournament on Tuesday, January 05 facing the Stafford Spartans and were led by the defensive efforts of Maricarmen Velasquez and Beksy Hernandez. Scoring began off the foot of Anali Villanueva who followed up with two more goals to complete the hat trick. Berenice Gomez (Captain) also added a goal. 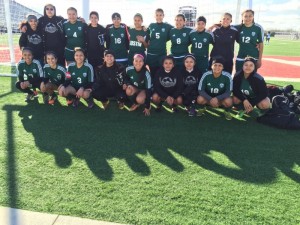 On Friday, January 08, the Austin Lady Mustangs were up against Klein Oak (a state ranked team) and led throughout the first half thanks to the goal by Anali Villanueva. Steady leadership by Aremy Rodriguez, Luisa Rodriguez and Maricarmen Velasquez helped Austin maintain the lead. Austin fell to Klein Oak in the second half 2-1. 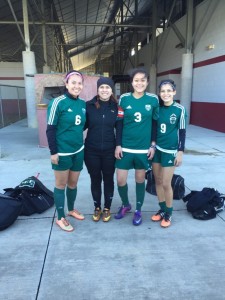 Saturday was the start of the semi-finals of the tournament facing off against West Columbia High Roughnecks. The game began with a quick goal by Anali Villanueva and with a team defensive struggle during the first half. Annette Sandoval later added a goal off a steal. Austin allowed one goal off of a penalty but that would be all she wrote for the Roughnecks because Austin finished out the game with a win 2-1.

Austin moved forward against the Sweeny High Bulldogs for the Silver White division final and fought through a defensive struggle throughout the game. Captain Berenice Gomez chipped in a goal off a free kick by Luisa Rodriguez. The Lady Mustangs showed true heart and grit to finish the game with a 1-0 win and a championship! 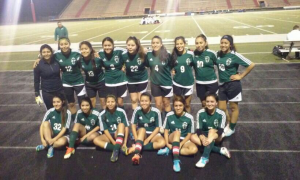